Concerned over COVID-19 and Costa Rica?

Concerned over COVID-19 and Costa Rica? You shouldn’t be and here’s why.

Costa Rica has been a popular vacation spot since the late 1980s and welcomed 3.139 million tourists in 2019 and 3.016 million the previous year. So it was understandable when the country announced its first case of COVID-19 on March 6 before many of its Latin American neighbors. Three days later, large gatherings were prohibited, and a state of emergency was declared on March 16 when the country registered 41 cases of the virus. Schools were closed and restrictions placed on non-essential businesses. The country announced that it would be closing its borders on March 19 and that only Costa Rican citizens, residents, embassy staff and/or other exemptions would be permitted entry into the country.

Easter week of March 6 — 10 was considered a high-risk period for infection spread as it is the traditional vacation week for locals. The government combated this by outlining much stricter regulations on vehicle circulation which effectively kept much of the population at home. Beach closures and the reintroduction of the Dry Law in many of the coastal towns forbidding alcohol sales made a trip to either of the country’s shores less appealing.

Beaches and national parks have been closed since March 20 as part of the government’s drive to deter movement from the heavily populated Central Valley area — where medical facilities and staffing are more prepared to deal with a wave of medical emergencies than the rural hospitals in the rest of the country.

One [license plate] to rule them all

Costa Rica’s constitution guarantees its citizens freedom of movement so the introduction of curfews or other restrictions to prevent people traveling across the country was impossible. Unlike neighboring Panama which reduced movement by only allowing men and women to leave their homes on different days, Costa Rica’s lawmakers dodged the constitutional headache by introducing road circulation restrictions based on the last digit on the license plate and restricting hours when vehicles could drive. These restrictions were then tightened over the weekends when vehicles are restricted to driving either Saturdays or Sundays to either the supermarket or pharmacy. With license plate confiscation, a fine, and points on the driver’s license as consequences for driving outside of permitted times, the restrictions have been largely effective. 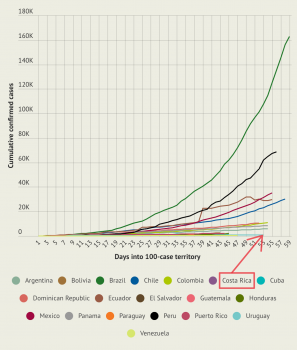 As of May 12th, Costa Rica has tested almost 17,470 people and reported 804 positive cases of the virus with only seven deaths. As the President pointed out, the low mortality rate of 0.87% is due in part to Costa Rica’s investment into universal healthcare, social security and education since abolishing its army over 70 years ago.

Supported by the country’s respected Health Minister, Daniel Salas, who is a qualified surgeon and epidemiologist; the country has been guided by science in its decision making and received factual and informative briefings daily on numbers and any changes to restrictions. Check out their Twitter feed for daily data reporting.

Per the Costa Rican Minister of Health’s figures, May 21 brought the total test numbers to 21,929 with 903 confirmed cases, 592 recoveries, and 10 deaths.

As of May 28th, Costa Rica reported 16 new cases to bring the number of confirmed cases to 1,000 although this total includes 646 people who have fully recovered. Latin America has taken the unenviable title of being the current center of the virus due to the rapid spread in Brazil especially but Costa Rica hopes that maintaining careful social distancing can ensure that the virus does not take hold over the country.

Update: Costa Rica’s numbers have continued to be much lower than its Central American neighbors. Up until the 31st of July, the country had reported a total of 17,820 cases and 150 deaths. The Government’s “hammer and dance” approach to localized lockdowns for areas where high numbers of active cases have been reported and further conversion of hospital wards for dedicated COVID care have ensured that the continued health crisis has remained under control while much of the country moves into further stages of reopening.

International news sources such as the BBC, ABC and CNTraveler have applauded Costa Rica’s successful efforts in managing COVID-19 within the country. With the lowest mortality rate for the virus in Latin America, the nation is hoping to emerge from this global crisis as an attractive vacation option for tourists eager to get some sun after weeks, if not months, of “stay at home” lockdown. Costa Rica does not have many destinations which attract a high concentration of tourists and its boutique establishments at beach, volcano, and jungle settings are ideal for maintaining social distancing.

Even New Zealand’s success story — which has been picked up by the media, pales in comparison with Costa Rica’s numbers. Prime Minister Ardern’s efforts to quickly bring in strict measures led to the country registering only 1,476 positive cases and 19 deaths; however, Costa Rica has less cases and deaths even though the country’s populations are a similar size.

Costa Rica has borrowed New Zealand’s concept of Social Bubbles which minimizes the risk of transmission according to Stefan Flasche, the Associate Professor of the London School of Hygiene and Tropical Medicine. The bubbles consist of members of the same household and cannot be mixed with people from other households, work colleagues, or more distant family members.

The National Chamber of Tourism (ICT) predicts that Costa Rica could still receive 300,000 visitors before the end of 2020 if flights are resumed in August. Airlines will obviously have to introduce social distancing protocols for passengers and measures will be in place to ensure safe entry into the country at airports. The government is fully supporting the Costa Rican Institute of Tourism in its initial publicity to reactivate tourism for nationals before expanding its positive message to welcome international visitors into the country again. Younger visitors are expected to be the first to return to the country as they are less vulnerable to the virus and the ICT will be encouraging pricing throughout the industry to make vacations more affordable to tourists who usually have less disposable income than retirees.

What, if anything, has reopened?

There was some relaxing of measures when the number of reported cases had declined for 11 consecutive days and since May 1, the following businesses were allowed to reopen:

During the weekend, between 5 AM and 7 PM:

Vehicle restrictions in place since April 13 will continue through May 15 with transit being limited by license plate number between 5 AM and 7 PM and a total vehicle restriction between 7 PM and 5 AM every night. Moving forward, the government will reevaluate the measures every two weeks.

Commerce and restaurants will follow thereafter before Costa Rica prepares to reopen its borders on June 15.

Large-scale events will be the last step of the process.

President Carlos Alvarado will coordinate with the World Tourism Organization and other bodies to reactivate international tourism in the country with the appropriate protocols in place. He hopes to continue to move Costa Rica forward on its ambitious target of becoming carbon neutral by 2050 despite the economic blow delivered by the virus and considers the situation could provide opportunities for the creation of new sustainable businesses.

What are these ‘bubbles’ you’re talking about?

The concept of Social Bubbles are for public places in order to reduce the spread of the virus.
As such, each bubble should be formed by people who live together and maintain a distance of 1.8 m from other social bubbles.