We are blessed to have a Costa Rican locale as one of the featured finalists in the 2016 Weather Photographer of the Year competition, sponsored by The Royal Meteorological Society and The Royal Photographic Society.

Punta Banco is one of Costa Rica’s undiscovered beaches.  Located on the Pacific coast, this tiny village of just 200 people lies within three miles of the famous Pavones Beach — which is where surfers can ride the second longest wave in the world.  Surfing Fact:  Chicama, in Northern Peru has the longest wave.

However back in Costa Rica, Punta Banco was the setting for the image below — showing a very rare type of lightning called a sprite.  (click image to view larger size) 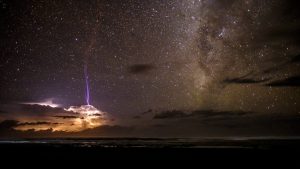 As photographer Ben Cherry explains, "The storm was far out at sea during a new moon, so there was very little light.  And, as a result, the stars were spectacular.  I set up the frame to include the pulsing storm and the Milky Way as I liked the contrast.  Just after I started the 30-second exposure, this sprite strike illuminated the sky, shooting up into the atmosphere, my jaw dropped, and I assumed that it would have blown out the image, but I was thrilled to witness it."

The waves of Punta Banco still offer surfers a chance to hang ten, and without the crowds that sometimes collect in the waters of Pavones.  The black sand beach of Punta Banco is more than just a surfers’ hangout though.  Between the months of July and December, it’s a valuable nesting ground for Olive Ridley turtles.

The area is a nature-lover’s dream year-round.  The rainforest surrounding the beach are home to all four monkey species found in Costa Rica, and a diversity of other flora and fauna.

The road into the Punta Banco from Pavones is about a thirty minute drive from Pavones despite the distance.  This gives a clear indication of the road conditions — consider renting at least a mid-sized SUV to get there.

Pavones is almost an eight hour drive from San Jose.  Drive first to Quepos and then down the coastal Route 34.

From Dominical, drive back inland to Palmar Norte and onto Rio Claro.  Head back to the coast towards Golfito.  Take the short ferry ride across the Rio Colorado and then onto Pavones and Punta Banco.

Either way, it’s well worth the journey!

Cast your vote today to promote Costa Rica to the world by visiting the Short List and clicking on the image you like the best — hopefully it’s Ben’s.  😉

Do hurry though as the voting closes August 28th at midnight…to be continued!