NASA has recently revealed new technology that could soon make flight delays and cancellations due to volcanic ash clouds a thing of the past.  Disruptions, like that to San Jose’s Juan Santamaria Airport due to the rumblings of Turrialba Volcano last year and briefly last week, may be avoidable in the future. 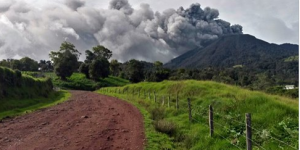 Ash can cause airplane engine issues, so authorities are understandably nervous when volcanic activity occurs in the vicinity of an airport or flight path.  However before now, there wasn’t a way to tell the difference between a regular, water vapor cloud and those volcanic clouds.

The technology developed by NASA scientists at the Goddard Space Flight Center in Maryland can distinguish between volcanic ash clouds and rain clouds using sulfer dioxide.  It’s planned that data from the NASA satellites will provide the vital information needed in order to issue alerts to the FAA and National Weather Service.  The aim is to avoid the blanket flight cancellations and delays caused by the failure to distinguish between varying cloud types.

Fortunately, Costa Rican airport authorities are ready for any eventuality!