With excitement building ahead of the beginning of the 2016 International Surf Association’s World Surfing Games will be held in Jaco in Costa Rica tomorrow, authorities are keen to prepare the beach for an influx of visitors and competitors.  Extra police officers will be patrolling the streets for increased security.  Street vendors won’t be tolerated.  And the town council will be working to ensure that environmentally sound measures are in place for garbage disposal and to maintain water quality.  Inevitably accommodation prices are higher than usual with the increased demand, but it should be a competition to remember!

Costa Rica hosts the Games following the team’s victory at the 2015 tournament held in Nicaragua.  The country last held the games in 2009 when they were located in Playa Hermosa.

The World Surfing Games have been held since 1964 with competitors striving for the coveted individual and team titles with teams of a maximum of four men and two women.  Last year’s championship saw 27 countries and 132 surfers compete, with 2016 expected to be bigger and better.

Costa Rica is an internationally recognized surfing country with beaches on both coasts offering world class surf, and weather that allows year-long participation without a wetsuit.  The Games are expected to increase surf-related tourism this year.  The Costa Rican Institute of Tourism (ICT) reported 200,000 surf tourists entering the country in 2013 alone, and generating over $300 million for the local economy. 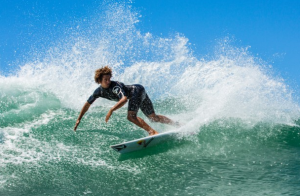 Costa Rican names to watch include Emily Gussoni and Anthony Finnigam who are the current number one rankings in female and male surf respectively.  There’s high hopes for Carlos Muñoz, last year’s champion, but veteran Caribbean surfer, Gilbert Brown isn’t out of the running.  Lisbeth Vindas and Leilani McGonagle are among the female surfers fighting for a place in the team.

Jaco Beach is an ideal location for the surf championship with consistent waves along a mile and a half in length.  The beach break reaches chest height to a foot overhead.  Catch the best waves a couple of hours before high tide.  Jaco’s popularity can be its downfall with the waters becoming crowded, but for those wishing to surf outside of competition time, nearby Playa Hermosa has great waves too.

The town is well-developed with accommodation and dining options to fit every taste and budget, but book hotel rooms in advance to avoid disappointment.  Nightlife is plentiful for those looking to party once the sun goes down with clubs, bars and casinos making this the liveliest beach town in the country.  The town’s proximity to San Jose and the international airport, just a 90 minute drive, has been fundamental in its growth and makes a few days at the tournament a possibility if time’s limited.

Bringing your board?  Ask your Vamos rep for your free roof racks on the rental vehicle and you’re good to go!  There’s also an option to rent-a-board here along with your car…that is if you can be without it that long.  😉

Tagged  sports, surfing, things to do.
Bookmark the permalink.
Subscribe