Since childhood, I’ve been a big fan of the dark spookiness of Halloween, including its roots from Samhain, an Irish Celtic pagan festival to the Catholic All Saints’ (Souls’) Day, and later, the more joyous, Mexico’s Day of the Dead. Although these traditions are fundamentally intended as days of remembrance in honor of those passed; they also claim a darker element that is a result of folklore and superstition surrounding death and the hereafter.

In 1997, October 31st was declared the National Day of the Masquerade by executive decree, thereby creating the equivalent of the gringo Halloween in Costa Rica. The country-wide festivities are marked by larger-than-life puppeteers dancing and causing mischief in the streets to fanfare cimarron music and the delight of local crowds. Coincidentally, the festivities have a similar darkly-comical ring to them that Halloween has for North Americans.

The origin of Costa Rica’s fascinating Mascarada dates as far back as the Middle Ages and is closely tied to Spain’s popular tradition of Gigantes y Cabezudos (giants and big heads) that first appeared during the reconquest of Muslim territory by Christian settlers. In Costa Rica, the Mascarada also reflects strong colonial and pre-Columbian indigenous elements, in particular from the Boruca and Cabecar people of the central and southern Pacific regions.

My first October 31, Mascarada was in the small town of Buenos Aires in Puntarenas Province. I was impressed by the artistic creativity and size of the mantudos (clowns) walking and dancing through the streets, and particularly by their sardonic representation of animals, death, devils, political figures, and local celebrities.

The giants and big head mantudos are handmade from a variety of materials and most commonly comprised of wooden or aluminum frames covered with fiberglass, polyester, or a paper maché mixture. The mask’s deliberately exaggerated features are painted with bright colors, and their frames are worn high over dancers’ heads adding to their theatrical movements as they dance and chase revelers. 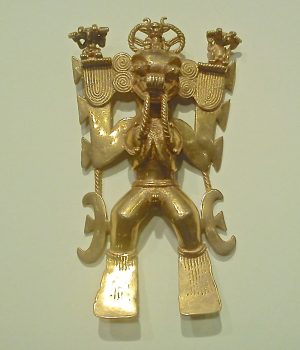 The indigenous component of Costa Rica’s Mascaradas is said to reflect both pre- and post-Hispanic influences. The portrayal of animals and death in ceremonial dances and festivities are prominent in pre-Columbian archeological finds; while upon European arrival, the first Bull mantudo artifact appeared and is believed to represent the Spanish colonizers.

Today, Mascaradas are performed ubiquitously at parties, carnivals, and tourist-frequented venues. Upon your next visit to Costa Rica, don’t miss the opportunity to see one live, and get a glimpse of the country’s rich and fascinating history. The jovial revelry not only marks a cause to celebrate, but creatively masks a deep and satirical component of the country’s present as well as its past.

Our Very Special & Unique Promo (if we do say so ourselves) 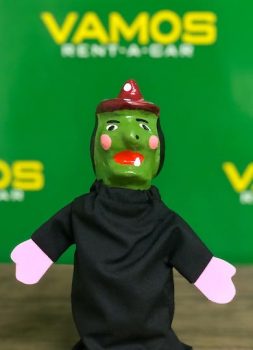 We’ve returned. This year our handmade puppet is based on the star of numerous children’s fairy tales — the witch!

Last year, we handed out puppets to those who were in our offices on Halloween day. Following the tradition, we’ve picked another easily recognizable character of the spooky season and commissioned their creation.

Instead of the apple-holding wicked witch, this smiling, rosy-cheeked, woodland figure wears a toadstool hat and brings a touch of Costa Rican culture wherever you are.

This limited production run of 50 handcrafted figures will be offered to each renter for free — whether picking up or returning a vehicle; it’s our gift this October 31st.

Next year, we’ll have a different character made by yet another artisan as our collectible holiday giveaway continues. Stay tuned to see who it will be!